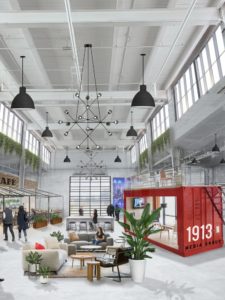 1913 Studios announces the purchase of 721 Springfield Street in Dayton, Ohio. The 210,000 square foot building will house three large production spaces, more than 60 offices and pre/post production support spaces that will support the next generation of cutting edge filming and media production. Construction is slated to begin in the first quarter of 2022.

“1913 Studios is excited to make this commitment to Dayton,” Joey DiFranco, co-founder of 1913 Studios. “This city has incredible infrastructure and a talent pipeline in terms of technology, media production, and the arts. We are looking forward to building our company headquarters here.”

Over the past year, 1913 Studios has been in conversations with organizations such as the City of Dayton, Montgomery County, FilmDayton, the Dayton Development Coalition, JobsOhio, and others as they refined their vision for the space. The facility will be a vertically integrated production studio that includes development, production, and editing suites all under one roof.

“We’ve worked hard to cultivate Montgomery County into a business-friendly area, and we’re excited that 1913 Studios has chosen to build here,” said Montgomery County Commissioner Judy Dodge. “This new, high-tech company is adding to our already diverse economy, and the content produced here will put the Dayton region on the map for media production.”

DiFranco and his 1913 Studios co-founder Seth Hummel both call the region home. DiFranco, a graduate of the Savannah College of Art and Design, returned to Dayton in 2019. Hummel, who completed post graduate studies at MIT, is a Dayton native and lifelong resident who has started and grown a number of businesses in the region. “Dayton has a well known history of innovators who have created industry leading technologies. We plan to continue that tradition by cementing this city and 1913 Studios as the premier multimedia production center of the Midwest,” said Hummel.

“This project is such a creative way to breathe new life into a space,” said Maranda Camden, business development manager with Wilcon, the Dayton-based general contractor on the project. “The way 1913 Studios will creatively reuse this massive space underscores their commitment to Dayton. Wilcon is thrilled to be part of this long-term vision and energy that will be concentrated here.”

Rounding out the project team is the Dayton-based architecture firm MODA4.

“Dayton’s architecture and building stock provides so many development opportunities,” said Jamie Owens, Director of Business Development at MODA4. “Having spent years working on The Arcade, we can’t wait to dig into another large project that demonstrates what can happen when a building is creatively modified with aesthetics and technology befitting the 21st century.”

ABOUT 1913 STUDIOS: 1913 Studios will be home to a state-of-the-art production facility supporting technology, content development, gaming development, media production and the arts in Dayton, Ohio, a region that embraces opportunity and is supportive of rapid growth.

According to Dayton Regional Film Commissioner Lisa Grigsby, ” 1913 Studios are going to be a game changer for the film industry in Dayton.  Bringing new jobs, internship opportunities and National attention to the students of the Tom Hanks Motion Picture School at Wright State University, FilmDayton knows that the playing field in Dayton just got bigger and we are ready to take on the challenge.”

Join us in celebrating Julia Reichert! 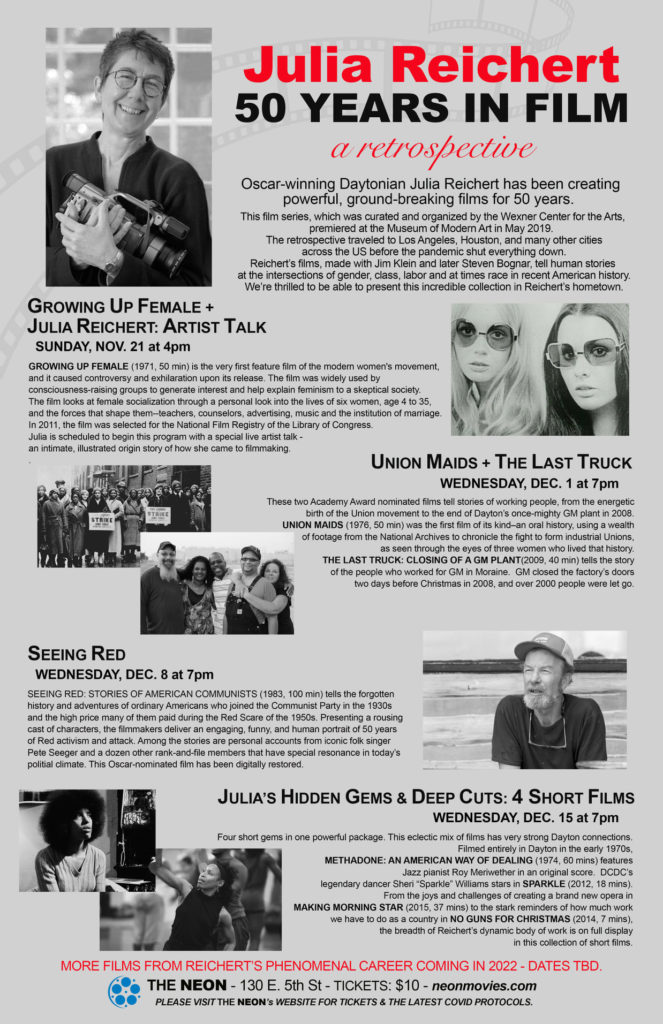 Get your tickets now!

In the early 1970s, a group of secretaries in Boston decided that they had suffered in silence long enough. They started fighting back, creating a movement to force changes in their workplaces. This movement became national, and is a largely forgotten story of U.S. twentieth century history. It encapsulates a unique intersection of the women’s movement with the labor movement. The awareness these secretaries brought to bear on women’s work reverberates even today. Clericals were the low-wage workers of their era. America now confronts the growing reality of deep income inequality.

We’ve got a new home at the Dayton Mall!
Located on the 2nd floor near JC Penney’s, our new space will host Film Connections and be available for our members to use for castings, table reads, small screenings and classes!

Big thanks to  Lauren Amber Whitinger, an intern who worked with us in May from the Modern College of Design.  She helped us update some graphics, member info and had a chance to work on set with Chase Crawford on film being made in Cincinnati.

In the early 1970s, a group of secretaries in Boston decided that they had suffered in silence long enough. They started fighting back, creating a movement to force changes in their workplaces. This movement became national, and is a largely forgotten story of U.S. twentieth century history. It encapsulates a unique intersection of the women’s movement with the labor movement. The awareness these secretaries brought to bear on women’s work reverberates even today. Clericals were the low-wage workers of their era. America now confronts the growing reality of deep income inequality.

‘American Factory’: Meet the Filmmakers Behind the Oscar-Nominated Doc

An exploration of the life & music of Miles Davis.

FilmDayton is pleased to present a locations database to better serve the needs of filmmakers looking to use the backdrop of the Miami Valley for productions.

The following resources are provided as courtesy. FilmDayton in no way endorses these vendors, we just are aware they have been engaged in local film endeavors.

All Eligible Expenditures will be Credited at 30%

Ⓒ FILMDAYTON LLC. - All Rights Reserved // Made with ❤ in Dayton // Site Experience Created by Mitosis