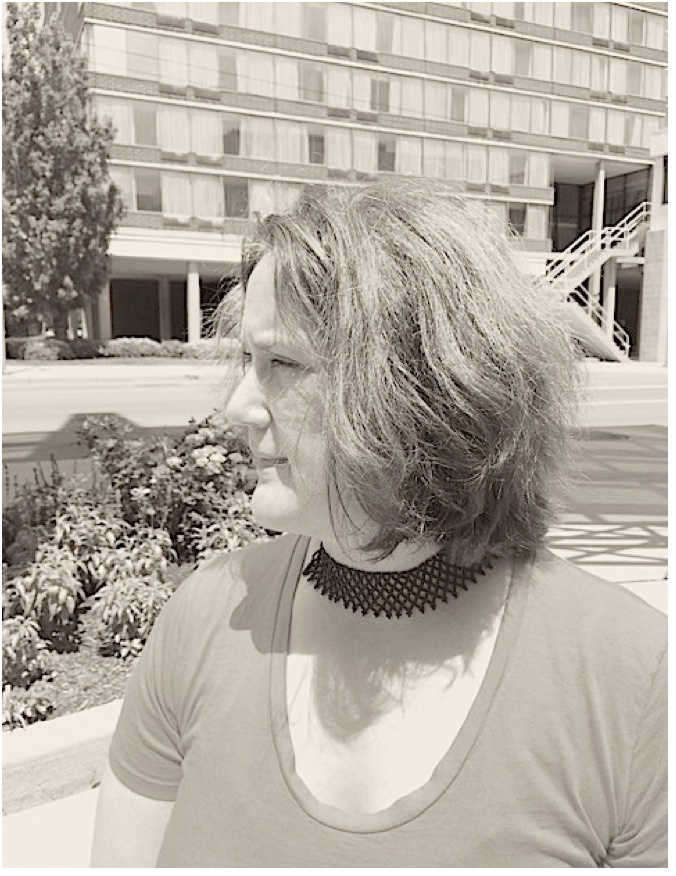 Vanessa O’ Kelley earned a Motion Pictures degree from Wright State University in 1997. She has worked in the Library of Congress for over 15 years preserving rare films in need of digitization. She has divided her time as a set dresser on film sets such as, Miles Ahead (2015), Carol (2015), and the Avengers (2011). Recently, she has rediscovered an interest in creative writing.

Where were you born? I was born in Defiance, Ohio. I was there until about thirteen. My mom got a job at the Dayton Art Institute as their dossier coordinator and my dad was teaching English at Defiance College. My mom decided to move to Dayton and then just go back and forth on the weekends. I decided at some point to live with my mom because I wanted to do filmmaking at Wright State.

How did you get started in your career? When I first went to Wright State photography and cinematography were my interests. My mom dabbled in photography and we had a dark room in our house. As time went on I just kind of fell into the role of the art director at school. I just found myself doing that on a lot student’s films and just really liked it. When I was still at Wright State I got a job at the Library of Congress. While I was there a friend of mine from Wright State Pat Steele started and it got to a point that the Library of Congress was going to move their entire facility to Virginia and neither of us wanted to leave. He had just written his first feature film (True Nature) and was interested in making it in Dayton. So he was like why don’t you come on board and be my production designer. That was kind of a big leap of faith for him because I hadn’t done it professionally. That was a really a good experience for me because it gave me the confidence to step up to the task.

Is there any film that inspired you to become a set dresser? I’m really attracted to and obsessed with people’s personal spaces—things that appear really mundane. What people have on their desk at work, in their refrigerator, or next to their bed, or inside their bathroom cabinets. I’m just sort of nosy that way. There’s something not normal about all of us and it shows in the things we are obsessed with. The things we collect. The things we clean and don’t clean. Those things really kind of get me going. I like to look at people’s books. I have always been interested in what people have—not in any kind of judgmental way. I would be interested in doing a serial killer’s lair someday. I think that would be really fascinating.

Has that changed the way you create your space? You know, because I’m so busy I don’t have time. It’s sad to say because I always think that I should have this immaculately designed, beautiful, perfect space. It just sort of heaps of stuff that I don’t have time to put away. That’s what my space looks like. I sort of at the point where I need clear out my space and reorganize it—maybe tomorrow.

“The name of the Nasa facility I dressed for the Avengers (GRC) is the largest vacuum chamber in the world at Plum Brook Station. In the film it’s the tesseract facility where Sam Jackson and Stellan Skarsgard have a conversation at the start of the film. That’s probably the coolest place I’ve dressed for a film. I didn’t make the final credits—no Ohio crew did as far as I know.”

Have you written anything? Right now I’m writing a lot of poetry. I just went to the Antioch writer’s workshop with some poetry. It’s a really a great experience. I can’t wait to go back. Lot of my poems seems to be about my family or family members that I have loss, and I’m sort of thinking about writing some sort of memoir through poetry.

What’s your favorite poem that you have written? I wrote a poem my dad. My dad died in 2011. He kind of introduced me to poetry. I found some poems that he had written after he died that I didn’t know he had written. So, I just wrote a poem about visiting his grave in Woodland Cemetery. Woodland I find is very inspiring. I walk through there a lot. That was probably one of the first ones that I wrote that I thought wow—I wrote a poem!

Father
I speak to your silent stone. Too aware of my voice,  Loud and harsh, within your serenity.

I recall the quiet of you, even in life, And whisper my regret.

What types of books do you read? I like a good crime thriller. I like Ann Lamott. I currently reading her book called Bird by Bird. I’ve also been reading a lot of books about writing recently. Vanessa dressed in a hazmat suit on set for PRODIGIES

If you had a limited budget what type of film would you make? If you make your story contemporary you don’t have to spend a lot of money on antiques to set up your story in the past. The fewer locations that you dress the more money you spend on making the locations you do have as authentic as possible.

If you had an unlimited budget? I would make sure my crew is well supported. It is harder on the crew the less money you have and the less resources you have. With an unlimited crew I could have plenty of dressers, truck drivers, painters, and construction workers. Have all those departments fully staffed. Also, when you have an unlimited budget you have the benefit of time. You are not cramming everything in a short span of time and having super long days with just a few people to get it done. So on an unlimited budget I would spend on the making it look the best it could be.

What’s the benefit of making a film in Dayton or in Ohio? The main benefit is just the cost of things. The cost of the crew, equipment, is less than what it is in other places like the hubs of production like Atlanta or Hollywood. We’ve  got a good base of crew members here and after every film we link up with someone who wants to get in the industry. After filming The Long Home (2017) we recruited several new people. That union is growing with every film. If people come here for budgetary reasons they would find that there is crew and talent here to support you.

What are you currently working on? Spending more time writing. I think spent more time in my life avoiding my creativity rather than embracing it.